THE STORY BEHIND THE BOOK SERIES

The story of The Key of David: Loving God and Neighbor really started over a decade ago. I felt I was called to start writing a book about loving God with all our heart, mind, and soul. At the time, I really thought I had that part of my faith walk down and was well equipped to write about it. I seemed to be living the victorious life of a God-fearing woman. Everything seemed to be going in my favor in all walks of life.

However, as I began outlining my book, my life took several unexpected turns on multiple fronts, thrusting me into a long wilderness season of life. My life quickly turned from experiencing victory and favor, to facing multiple tremendous adversarial trials. In the upheaval, the book went to the back burner. As the years in the wilderness progressed, the book became a fading memory of the past.

It was in the wilderness of my own experience of treachery, false accusations, betrayal, verbal and emotional abuse that my Heavenly Father showed me just how much myself and others had to learn about loving Him with all our heart, mind, and soul and about loving our neighbor as ourselves. While I traversed my own wilderness, there were many traveling alongside me experiencing similar wilderness experiences of their own. The majority of the offenders were either from inside the congregations we attended or were professed followers of the God of the Bible from outside of our congregations.

Through the desert wilderness of adversity, I had learned that it is easier to love the friendly neighbors and family who love us in kind. However, it is extremely hard to love those neighbors and family who act as an enemy, to do good to those who do evil to us, to return blessings for cursing, or to pray in a spirit of love and kindness for the eternal souls of those who seek to destroy us. The Heavenly Father taught me that in order to master loving Him with all my heart, mind, and soul, I had to also master loving all my neighbors as myself, even the neighbors who acted like my enemy. He revealed to me that this was the missing link to the book I had been called to write and why He had not allowed me to write it as I originally intended.

In the summer of 2017, I was reading through a chronological study of David’s life. The Heavenly Father opened my eyes to things in David’s story that I had never seen before in the few times I had read through it in normal Bible order. This time, I deeply identified with David’s faith journey in a way I never had before. His story was a mirror of my own in so many ways. It was also a mirror of my fellow wilderness travelers.

David’s story is all about the perfect balance between loving God and loving his neighbors, even the ones who were his enemies. His story speaks volumes of the crucial importance of brotherly love and unity among God’s chosen people. David’s saga clearly reveals the devastation that division brings, devastation I have witnessed far too often among God’s people. King David’s narrative is a deep well of prophetic foreshadows of the Messiah and a tremendous training program in spiritual warfare. Overall, it is a story of God’s enduring Fatherly love, mercy, faithfulness, and redemption.
​
I originally started writing the lessons I was gleaning from David’s story on my blog. However, the Heavenly Father quickly redirected me to writing a two volume book series. In obedience, I began writing The Key of David: Loving God and Neighbor in the early fall of 2017. The Key of David series is a comprehensive life application Bible study of the life and times of King David, covering his anointing through his transfer of the kingdom to Solomon in rich theological and prophetic detail. The manuscripts for both volumes were submitted to DiViNE Purpose Publishing in the summer of 2018 and have publication dates in 2019-20.  All costs associated with publishing were divinely provided by the Father, as per His prophetic word and vision given to me. I pray the in-depth life application study of the life and times of King David blesses you and edifies you in your faith walk, as much as it has my own.
Blessings and Shalom!
~Angela Dawn 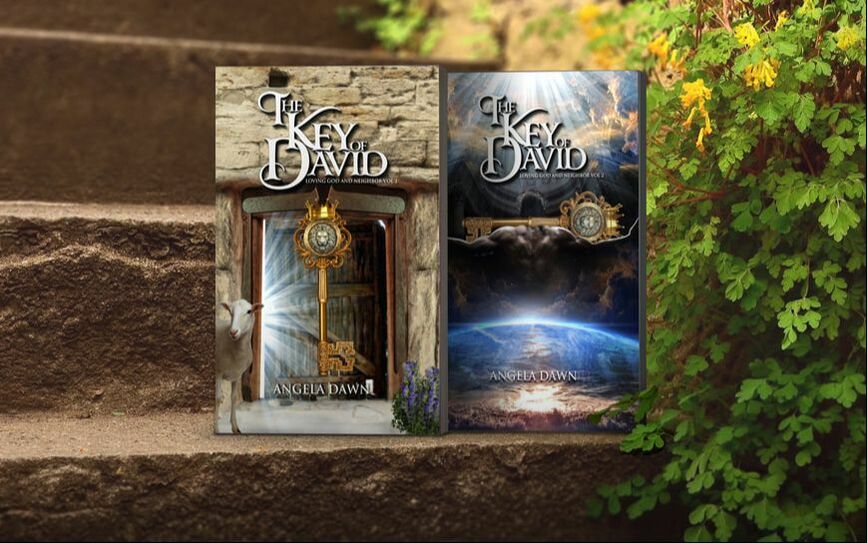 GET OUR BOOKS NOW !